On Saturday, I spoke at #mathconf10 in Dagenham. The workshop was titled “Worksheet-making Extravaganza!” Indeed it was that.

When I started teaching I regularly went onto TES to download resources for my pupils. Usually, I would be annoyed that I couldn’t find a good enough worksheet because the worksheet I wanted would never be available. I then realised that I needed to start creating my own. However, in the process I realised that I found making problem types for different topics to be difficult because my subject knowledge wasn’t up to scratch. Now, I am very good at maths but that doesn’t mean that I am good at making a worksheet of questions for pupils to do and learn from. Then after spending a summer between my first and second year of teaching where I made different resources combined with my own experience of working at Michaela Community School I finally realised how to make my own worksheet. Here are the two things that make a good worksheet:

What do I mean by high quality content? I am referring to the questions that are made to test a pupils’ understanding of the concept or procedure that has been taught. What is the starting point of gathering this content? If you are planning a lesson on how to simplify fractions then list out all the problem types from the easiest to the most difficult one. More problem types can be found by looking at different textbooks, asking colleagues and reading blogs etc. Let’s look at the problem types that can be included when planning a lesson on simplifying fractions, simplify a:

It is all well and good gathering a bunch of problem types but I have deliberately chosen the ones I have listed. This is because these problem types present four features that make the content of worksheet high quality: 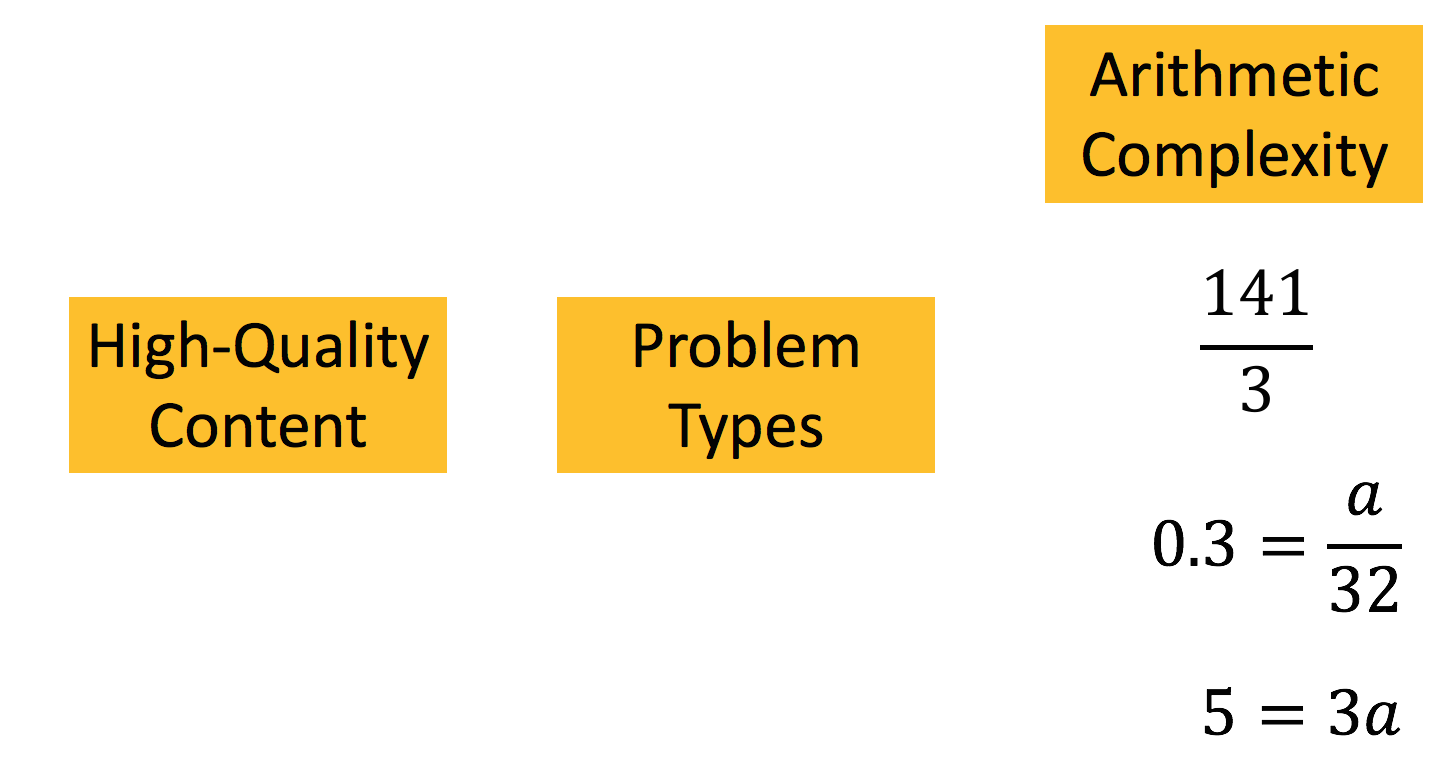 Visual complexity refers to creating questions which look a bit scary. Again, this can entail including large numbers to make a pupil think. For example, in terms of calculating the area of a square you can write a question where the length is a large two digit number or a decimal.

Another example is to only label one length of a square, more than two lengths, four length etc. A question like this is testing whether a pupil can calculate the area of a square from squaring one length. Another very simple approach to make this type of question visually complex is to have the image at a certain orientation.

Multiple steps is a feature in a question where you have increased the number of steps between the question and the answer. This can include having calculations in the numerator and denominator before a pupil is asked to simplify a fraction. 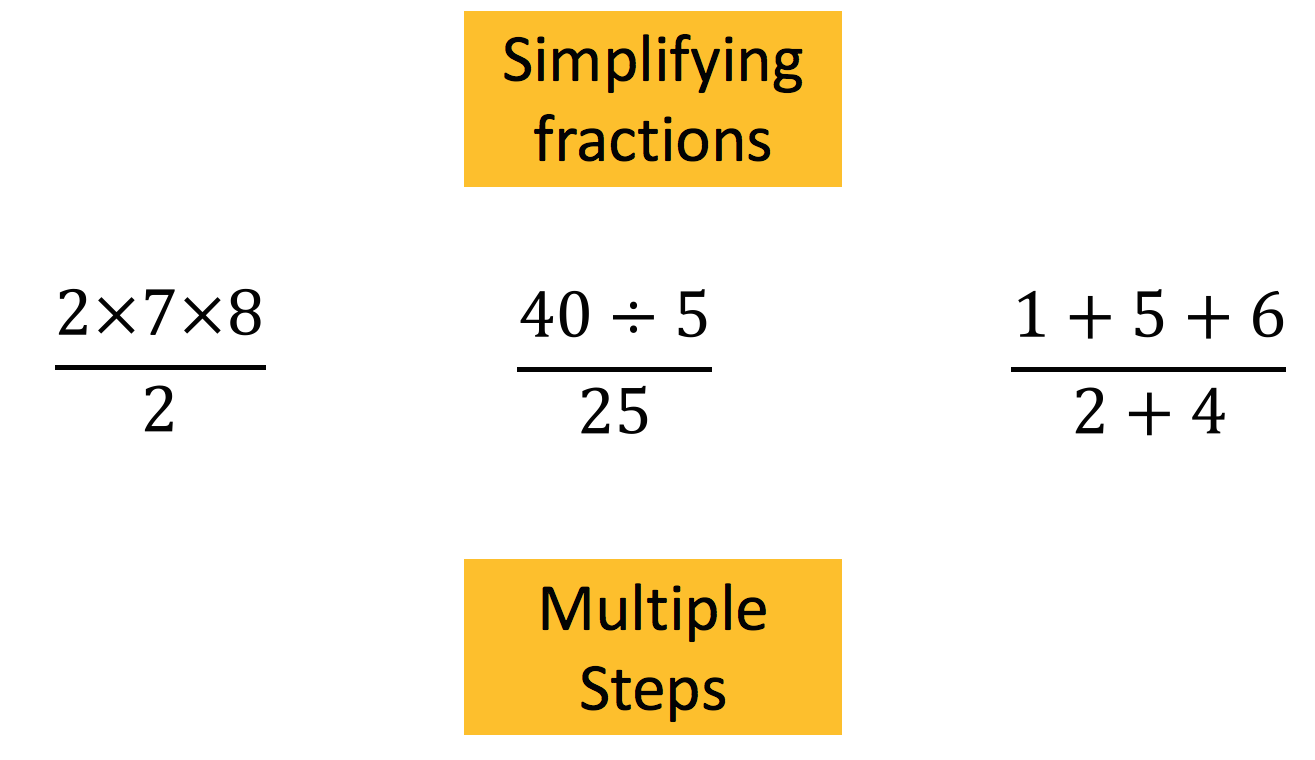 Decoding is a feature of a question where its set up is testing whether a pupil can rearrange or manipulate their new found information of the concept or procedure that has been taught. For example, providing pupils with questions which have incomplete answers. Or asking if the following equations are true or false? 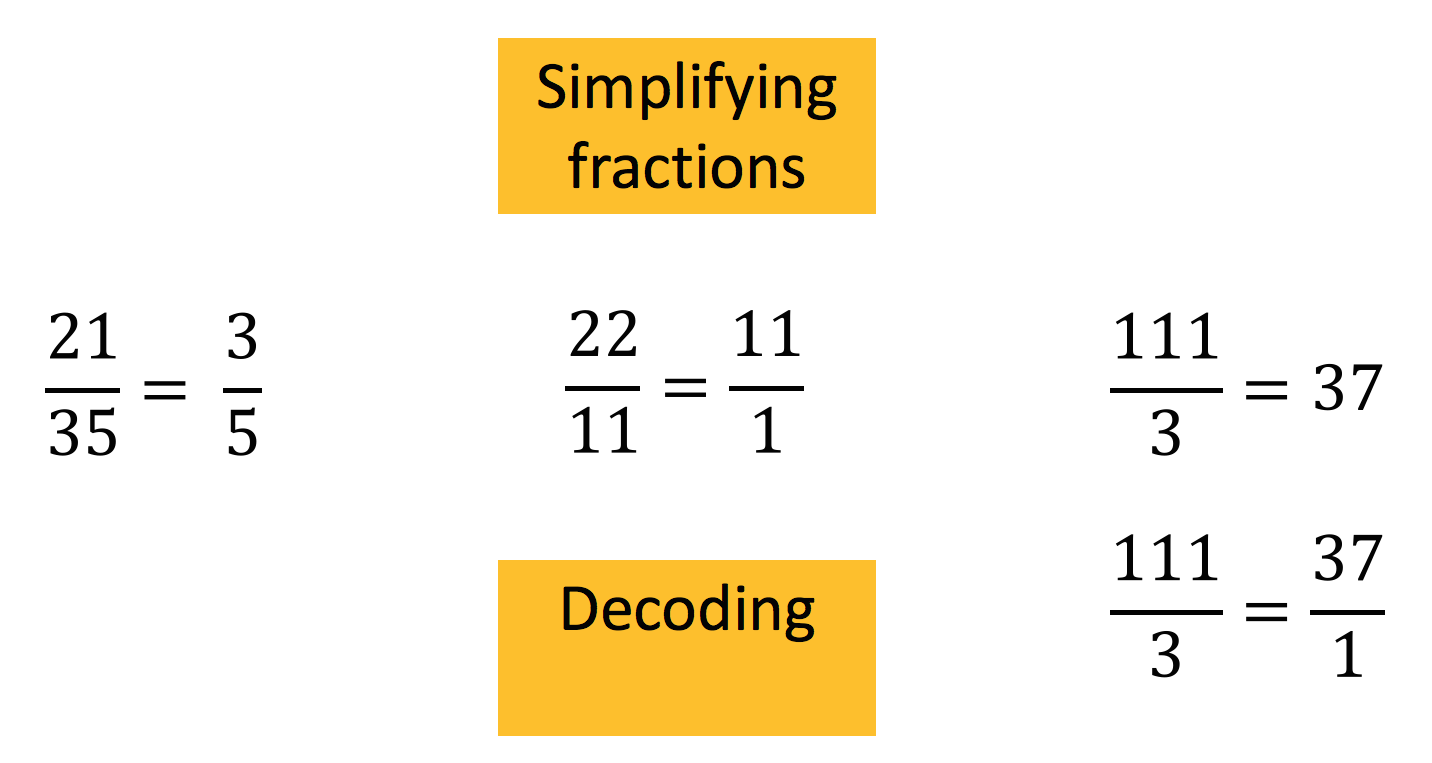 An exercise on a worksheet can look something like this. Question (g) is testing a pupil’s misconception where dividing a number by itself is not 0 but 1. Similarly, question (k) is testing a system 1 mistake where a pupil is not fully thinking about the question, they simply see that the half of 18 is 9 therefore the answer is 9.

Can I apply these four features of high quality content when planning a series of lessons where I want pupils to learn how to add and subtract fractions with like denominators? Again, start with listing out the potential problem types. Adding or subtracting:

I can make these type of question arithmetically complex by having large numbers in the numerator and the denominator. I can include a question when I subtract two proper fractions and the result is negative.

Questions can be visually complex by including more than two terms, or a string of fractions including fractions, mixed numbers and different operations.

Similarly, making questions where pupils are asked to add or subtract a proper fraction with a mixed number can be visually complex too.

Questions where pupils have to rearrange their information of adding and subtracting fractions with like denominators can include true or false question. The first question below is conflating adding a numerator and multiplying the denominator. 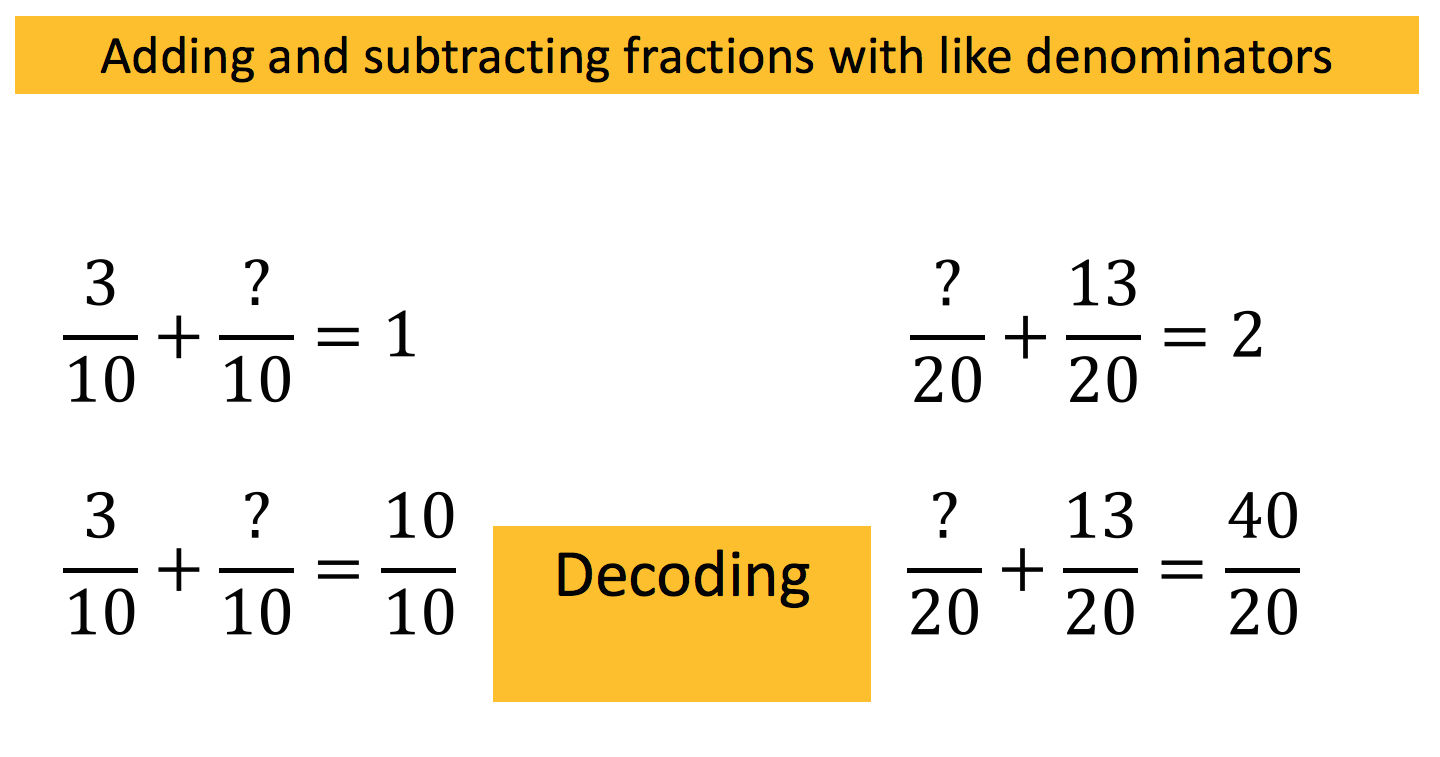 The following questions demonstrate the feature of questions having multiple steps between the question and the answer. Yes, you can easily write the answer, but if you wanted a pupil to write their answer as an improper fraction, you would want them to write the integer as a fraction.

Lastly, can we apply the following features to creating high quality content for the topic of powers and roots with fractions. Here are the problem types: 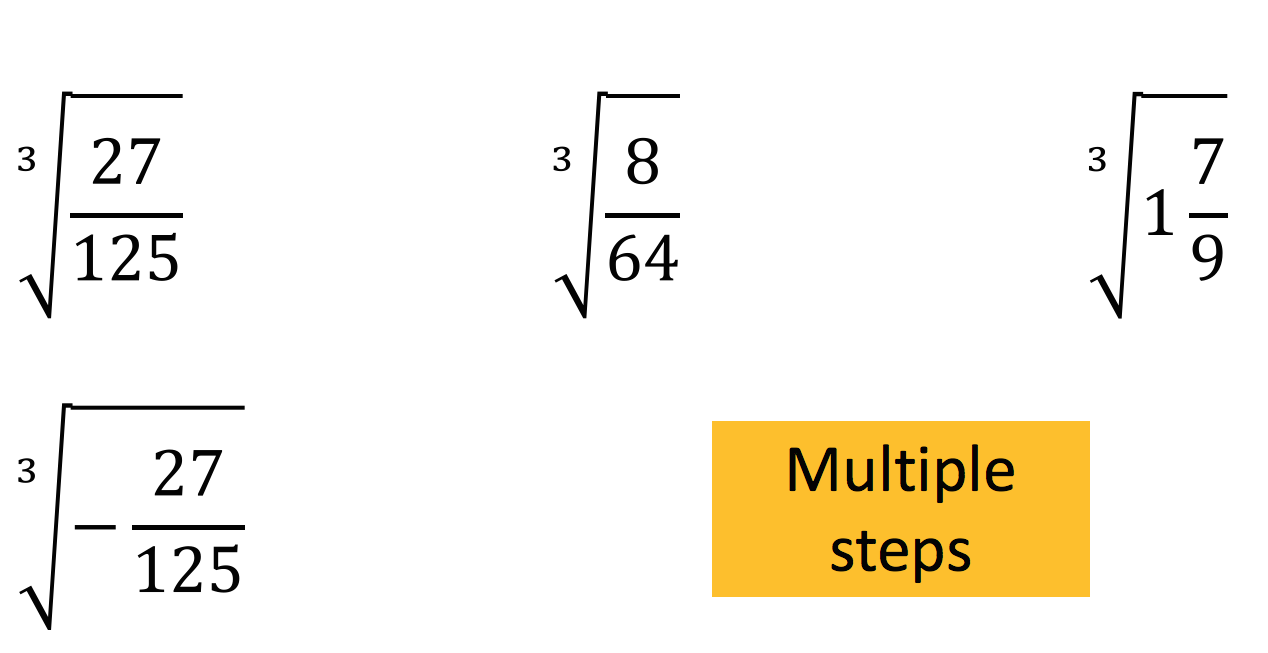 The mixed number examples are tailored so pupils are able to create an improper fraction where the numerator is still less than 15. Why? Simply because the kids at Michaela have committed the first 15 square numbers to memory as well as the first 10 cube numbers, but if I made the fraction more difficult where the numerator was greater than 21 then I would be making the question difficult for the wrong reasons. If the fraction was four and one-fifth then the numerator would be 21, and squaring 21 isn’t valuable. What is valuable is spotting the first step of writing the mixed number as a fraction, and then squaring the fraction. The mixed number examples demonstrate questions being visually complex as well as arithmetically complex.

The same form of thinking in applying the three features (arithmetic complexity, visual complexity and multiple steps) can be applied when fractions are being square rooted or cube rooted. However, ensuring that the numerator and denominator values are numbers that can be square or cube rooted.

What is new is including negative fractions when they are being rooted by an odd number. Furthermore, visual complexity as well as multiple steps to be performed to get the answer make these questions challenging and rigorous.

In summary, the four features which make a worksheet consist of high quality content is creating all problem types where they are arithmetically complex, visually complex, require decoding of current information from instruction and multiple steps to be performed to result in the answer.

I am still trying to wrap my head around creating a worksheet with high quality structure which will be my next blog post.

On Friday, I spent a couple of hours with a pupil in Y8 who has been selected to go through to the Junior Kangaroo challenge. Over half term, he was given past papers to attempt. We went through his answers and we discussed the questions he found difficult to do. In the process of going through some questions I realised how important knowing specific factual and procedural mathematical knowledge is crucial to a pupil’s success in the UK Maths challenge.

Here is a list of the topics that I am referring to as ‘powerful knowledge’ that allows pupils to become incredibly flexible in applying their knowledge to such questions:

Each UKMT question requires pupils to have basic knowledge facts at the fore front of their mind e.g. a square number has an odd number of factors, the first 6 rows of pascal’s triangle etc. More importantly, it is the interleaving of different concepts in each question which is why I think the questions are intelligently designed.

If pupils are quick in identifying the completing basic procedures within the following topics they can apply that knowledge to a wide selection of UKMT questions. Here are a few examples of questions which evidence this. The questions below also demonstrate how pupils’ knowledge of multiple concepts are being tested too: 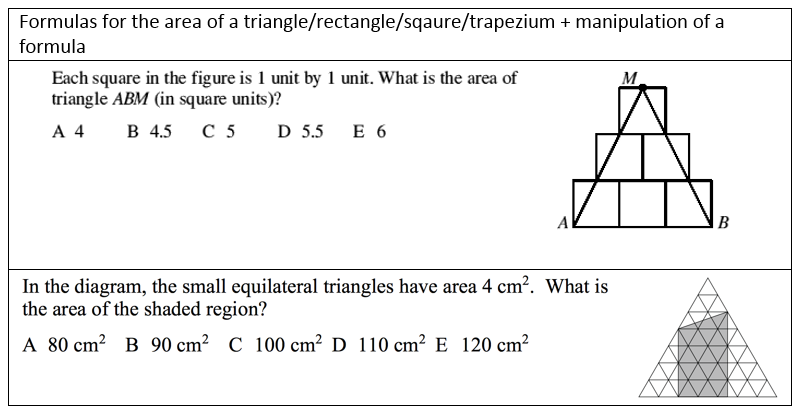 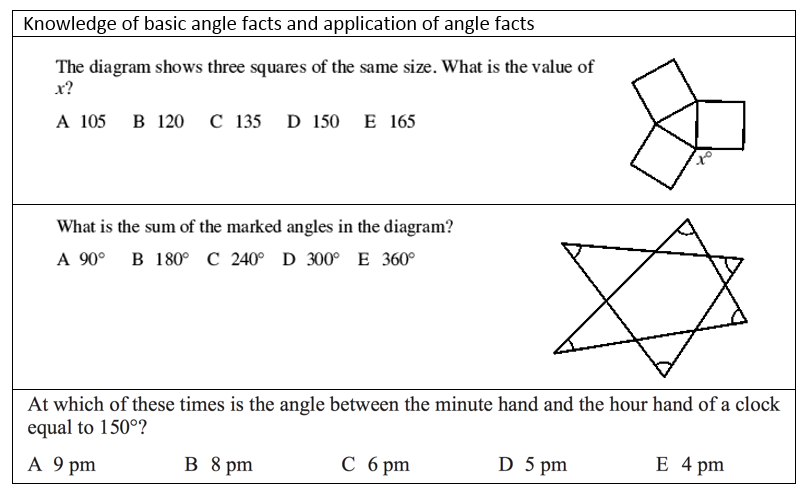 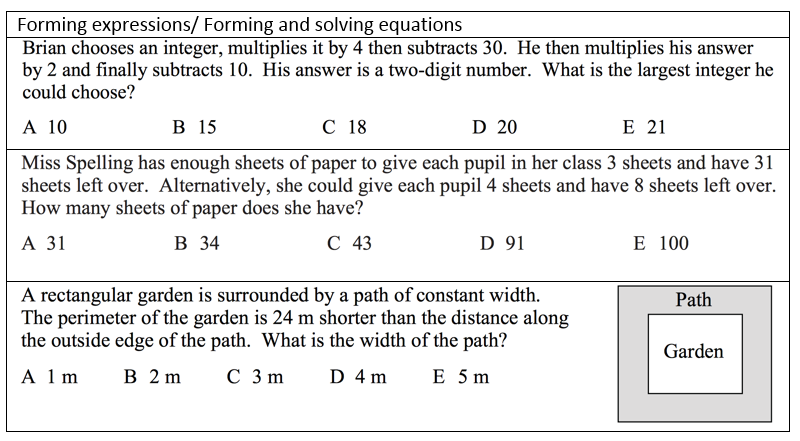