Circle Theorem #1: A right angle triangle in a semi-circle

We will now look at a potential non-circle theorem. I’m opening this up for debate. I’ve had a look around online and in articles whether ‘Two radii and a chord form an Isosceles triangle’ is considered a circle theorem or not. Right now, I’m going to state it is not a circle theorem but instead the start of a proof about the perpendicular bisector of a chord. Thank you to Ed Southall for clarifying. Follow him – he’s my geometry go to! I am flexible to change my mind.

I deliberately included this after the first circle theorem so I could interleave it into new problems. 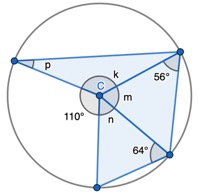 Show that: Two radii and a chord form an Isosceles Triangle

Here is a diagram for you to see this circle theorem form:

I have a circle where I draw one radius: 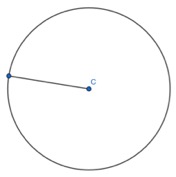 I draw another radius: 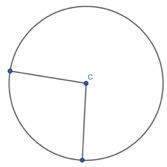 I draw a straight line between the two endpoints of each radii which are on the circumference of the circle: 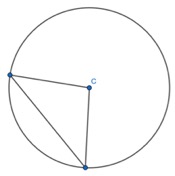 I then would show pupils that I can mark the two radii to show they are of equal length. I would show that the two equal angles of the triangle are of same size. And even mark the angles with identical values. I would do this live rather than with static images:

Now, there are two types of angles you can find:

1) One of the two equal angles 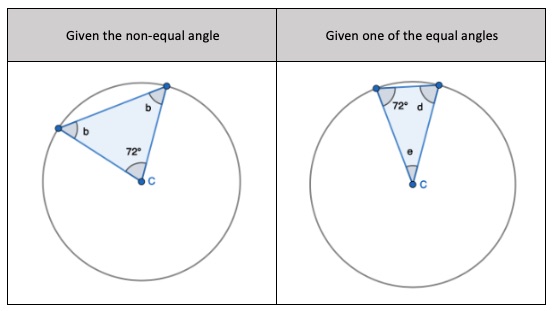 To find one of the equal angles, you’ll have the non-equal angle. Here are the steps:

To find the non-equal angle, you’ll have one of the equal angles. Here are the steps:

The structure of the booklet is the same as outlined in the previous blog post. There are ‘I do, We do’ examples and then a practice exercise at the end. Since this isn’t a circle theorem, I’m not going to show a selection of examples and non-examples. But, I’m interleaving the first circle theorem into the sequence.

Here are the teacher examples to find a missing angle or angles. The variation between the examples isn’t evident here. I try to change one thing at a time between the ‘I do’ and the ‘we do’ example. I’ll explain the thinking behind choosing each example: 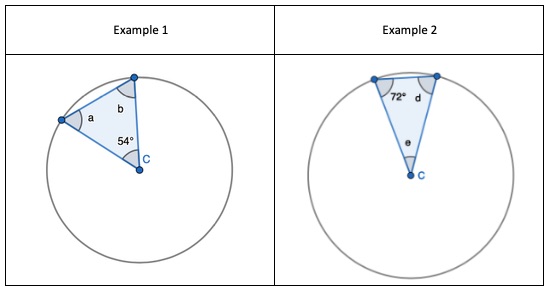 1. Show that two radii and a chord form an Isosceles triangle, only. Given the non-equal angle, find the one of the two equal sized angles.

2. Show that two radii and a chord form an Isosceles triangle, only. Given one of the equal sized angles, find the missing non-equal angle. 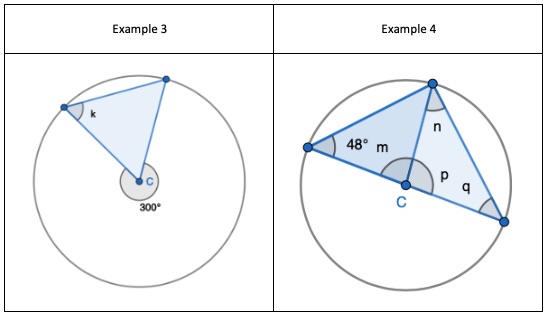 3. Interleaving the angle fact: angles around a point sum to 360 degrees. Find the non-equal angle to then find one of the two equal sized angles.

4. Two Isosceles triangles sharing a length. One triangle you are given one of the two equal sized angles to find the non-equal angle. Once you’ve calculated ‘m’ you can use the basic angle fact that angles on a straight-line sum to 180o to find ‘p’. 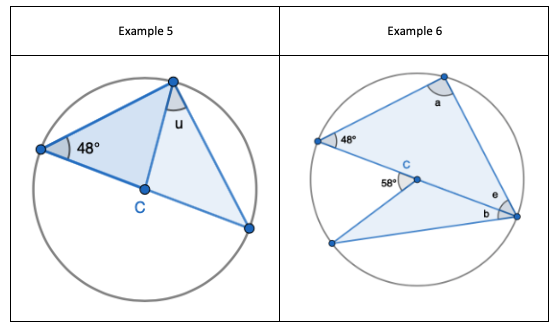 5. Same as Example 4 – angles needed to find before ‘u’ are not marked. Same logical steps. Also, can use the fact that angles on a straight-line sum to 180 degrees to then find ‘u’.

6. Interleaving the first circle theorem – A right angle triangle in a semi-circle 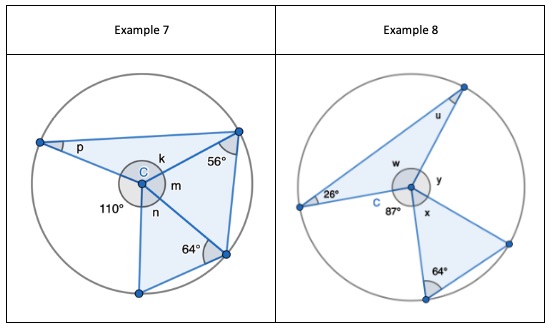 8. Two Isosceles triangles that are not sharing a side length:

Another reason why I wanted to include this feature because it allows pupils to apply prior knowledge from the topic of solving equations. There are two problem types that we will have to deal with:

In this case, the variable used for the two equal angles represented as expression will be the same. It has to so we can form an equation with unknowns on both sides to find the value of the unknown. I then labelled the non-equal angle with a different variable. I did this because I didn’t want to make an error in choosing an algebraic expression which shared the same variable as the two equal sized angles.

In the next problem type, I deliberately labelled the two equal sized angles with the same algebraic term or expression. This re-iterated that the two angles of the Isosceles triangle are equal. Given more time I would create more examples where the equal sized angles are labelled with different expressions sharing the same variable.

Is it possible for a mathematical problem be incorrect?

Thankfully, Tom Francome highlighted that I mislabelled one angle in a triangle with a different variable so the possibilities for that variable were endless: 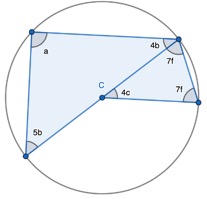 In January 2017, I wrote two blog posts on a selection of circle theorem resources. I was in my fourth year of teaching and I loved creating curriculum resources. I made the problems using activinspire because I hadn’t mastered Geogebra by that point. There were so many mistakes in the questions.

Some lovely teachers got in touch via DM and gave their friendly feedback. Others wielded their axe and punched me with mean tweets. Some others pretended to care by writing blog posts about the situation. As if they knew the cause behind my errors.

It wasn’t the best of times. But, I learnt that it is OK to make mistakes that you didn’t even know were mistakes. It highlighted that subject knowledge development is never ending.

What have I learnt from the experience:

I am familiar with Geogebra and enjoy using the application. Last year I re-created the circle theorem resources into a prepared booklet. I will release each circle theorem’s resources one blog post at a time.

Here are a few things to know about the resources that you are about to see:

My answer: all sets!

This isn’t a popular answer but it’s true. When you are teaching a concept for the first time the teaching should be the same for all sets. The only difference between high and low attaining pupils is the time taken to learn the concept. High attaining pupils recall prior knowledge and using it with fidelity compared to weaker pupils. I would teach a new concept explicitly with all pupils across the attainment spectrum. Can you imagine your low-attaining pupils finding the missing angles on this problem? 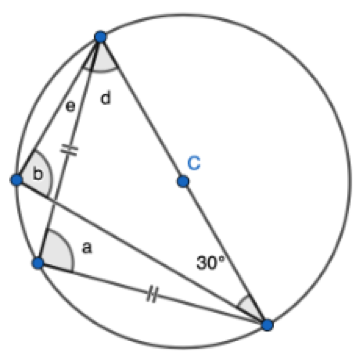 Introducing the Circle Theorem: A right angle triangle in a semi-circle

Here is a circle: 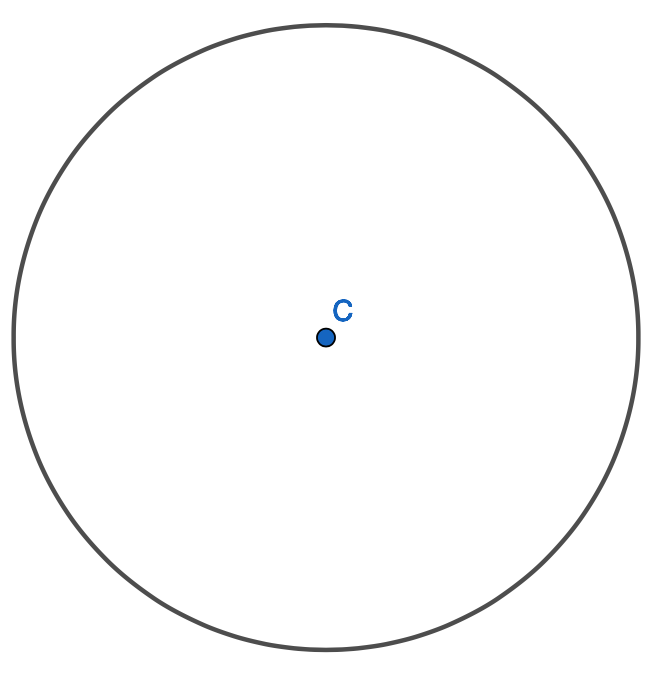 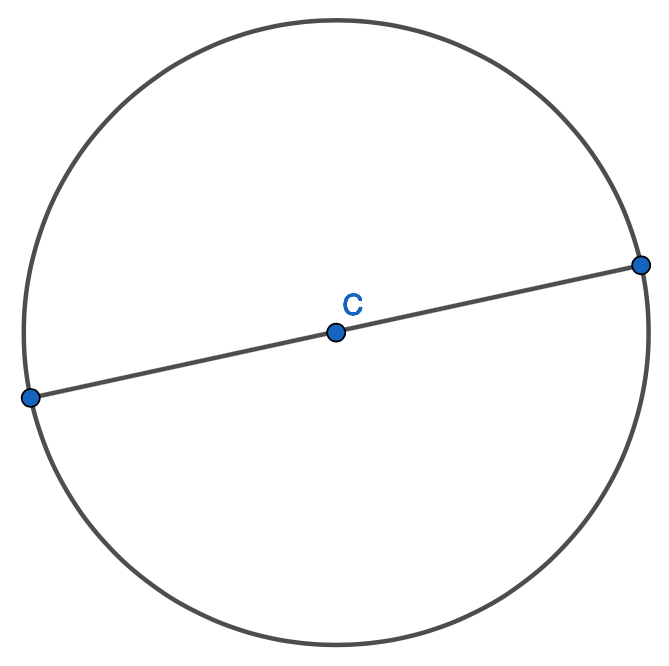 Draw a straight line to another spot on the circumference in one half of the circle from one end of the diameter: 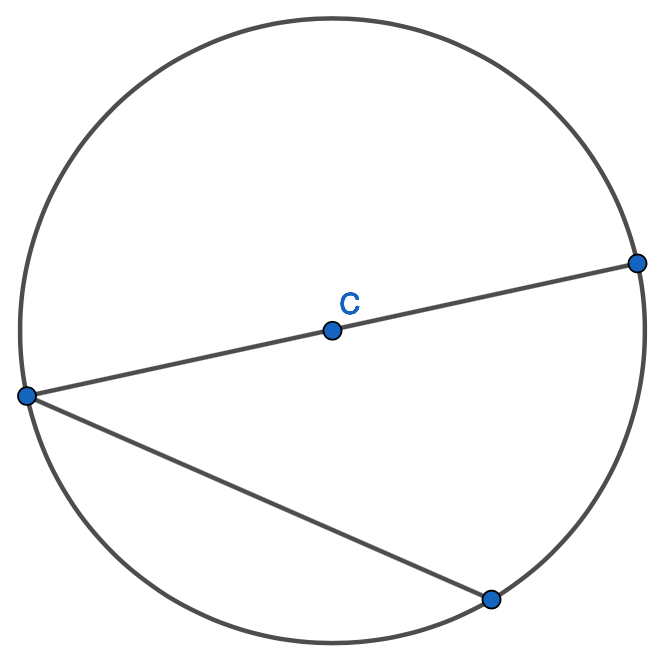 Complete the three-sided shape (triangle) by drawing a straight line between the two unconnected points: 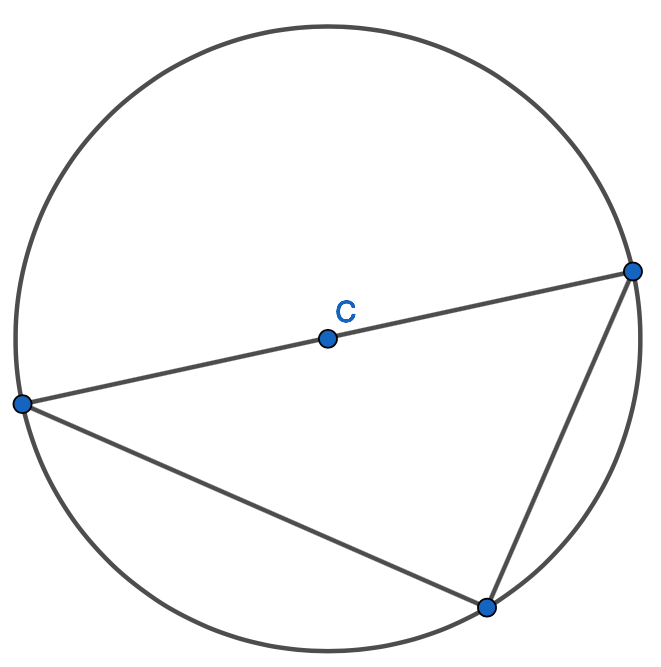 Specify the language to state the correct circle theorem example and its non-example.

“If we have the longest side of the triangle as the diameter of the circle, then we have a right-angled triangle.”

“If the longest side of the triangle is NOT the diameter of the circle, then we don’t have a right-angled triangle.” 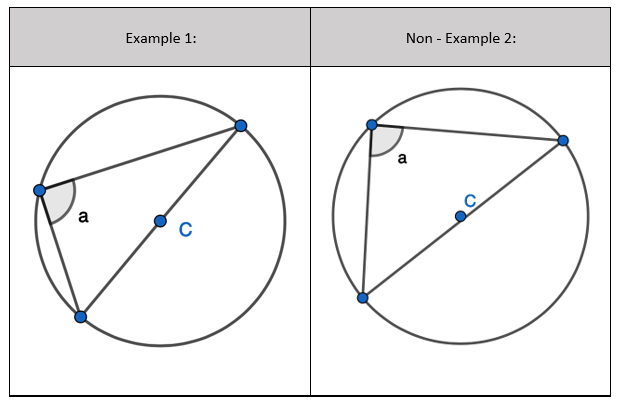 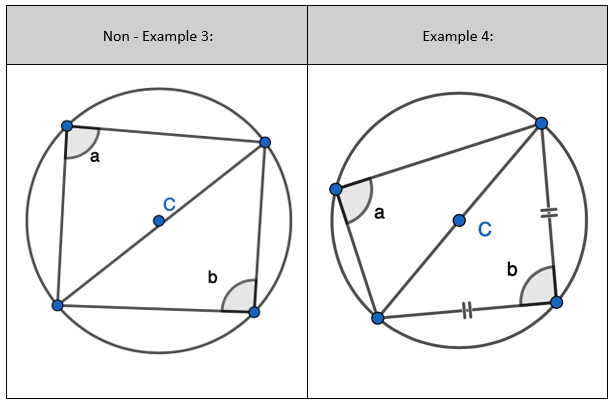 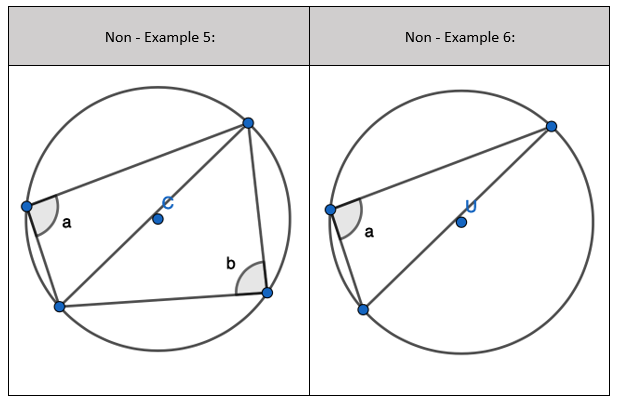 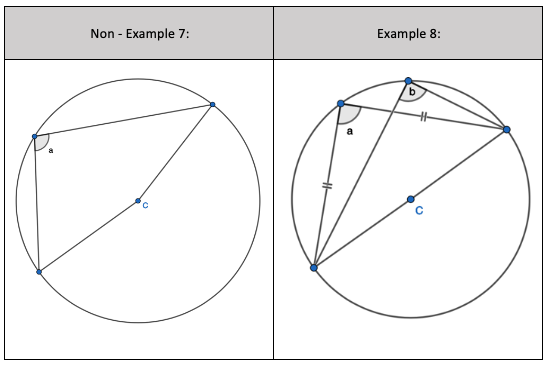 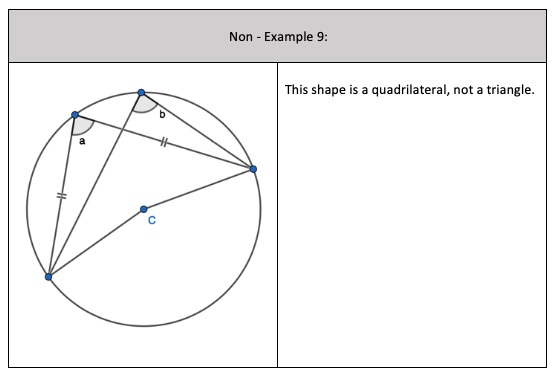 At this point, I would state the steps to find the missing angle before looking at a few examples.  Pupils can follow the steps if they lose track during the example explanation.

Here are the steps:

I usually do a ‘I do, We do’ set up when going through teacher examples. I will go through one example, and then pupils will go through a similar example. Same problem just different numbers. Completed on mini-whiteboards. Here is an example: 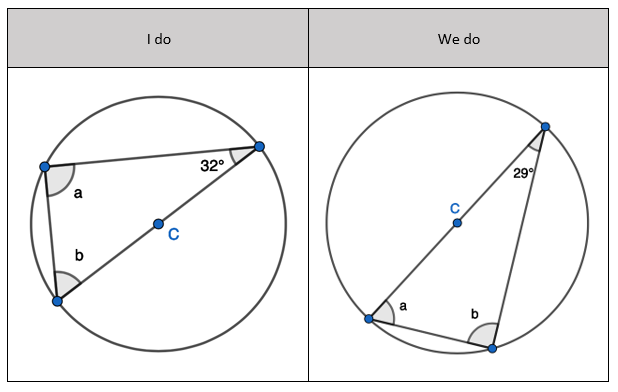 Here is the teacher sequence series only (‘I do’ only): 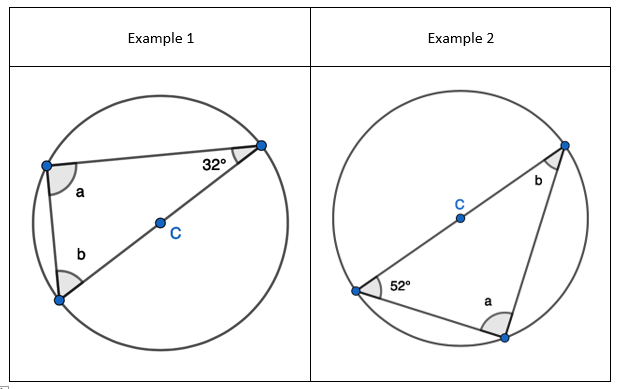 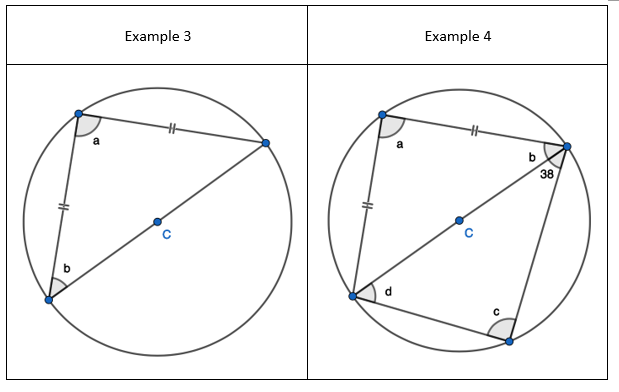 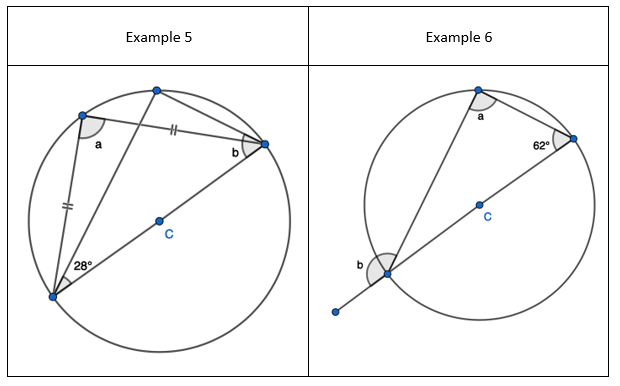 I included Example 5 to relate to a future circle theorem: Angles in the same segment are equal.

The algebraic section is incomplete. I thought I’d include it to see the variation theory applied in the examples.