At Michaela Community School we run a selection of extra curricular activities after school which complement pupils’ mainstream learning. In the Maths Department, we have a club called Mathletes. This club entails an additional hour of learning taking place once a week after school and it is specifically for one class that I teach (Top Set Y8).

This week I taught a session on imaginary numbers whereby pupils were able to solve the following equations independently: 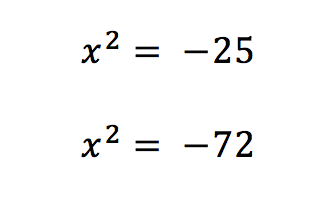 This blog is split into two parts. The first post will explain how I developed the pre-requisite knowledge pupils need to solve the equations above, with much focus placed on rational numbers because of the second equation. The second post will outline how I introduced a limited understanding of imaginary numbers, enabling pupils to solve both equations.

During my planning, I think of the pre-requisite knowledge pupils need in order to access the new topic that I will teach in the upcoming session. Before I started introducing the idea of imaginary numbers, I introduced the idea of rational numbers in a very limited sense. This was done deliberately – something which I will explain later on in this post.

A rational number is the square root of a square number which results in an integer answer. I introduced the concept like this.

This is not a rational number √2

This is not a rational number √3

This is a rational number √4

This is not a rational number √5

This is not a rational number √6

This is not a rational number √7

This is not a rational number √8

This is a rational number √9

This is not a rational number √10

This is not a rational number √11

This is not a rational number √12

This is not a rational number √13

This is not a rational number √14

This is not a rational number √15

This is a rational number √16

The above methodology was inspired by Kris Boulton’s talk on “The genius of Siegfried Engelmann”, delivered at The Maths and Science ResearchED conference in Oxford, and the National Mathematics Conference 7 in Leeds.

I asked pupils to raise their hands when they noticed the pattern. This was my introduction, because I wanted pupils to recognise that we can categorise the square root of a square number where the result is an integer as a rational number. I told them, for now, that this is a fact that you are going to accept and adopt, and that this is ok.

I am the classroom teacher of the pupils that attend the session and so I know how quick they are in recalling their square numbers and square roots. I also know they have memorised their times table facts from doing Bruno’s Times Table Rockstar programme, as rolled out in year 7 successfully by Bodil Isaksen, Head of Maths.

“I am going to identify my square number which I can evaluate to get an integer.”

“And I am going to rewrite it like this because we can”:

I also reiterated that I deliberately chose the largest square number (HCF) that can divide 72 because it is more efficient. I left it there, because I didn’t want to go into more discussion which would deviate pupils’ attention away from what I had shown on the board.

I then asked the pupils the following questions, before I asked them to simplify a selection of surds. I didn’t use the word surd because my focus for the session was not “what is a surd” or “how do I simplify surds” but because the point of this task was to develop sufficient pre-requisite knowledge in order to understand how we were planning to solve problems such as x2 = -72. This is why I previously mentioned that I introduced the idea of rational numbers in a limited sense.

Before pupils committed pen to paper to simplify the following surds I asked these questions which pupils answered by raising their hands.

I demonstrated a complete worked example of evaluating a surd and then I rephrased my questions:

“How can I rewrite  √48 as a calculation where I have an integer and a non rational number? Say Step 1 then Step 2”

One pupil responded, “because the square root of 16 is 4, Miss.”

Twenty questions later and we were moving on. These were the questions pupils were asked to complete to check they were able to simplify the following surds into the form k√a where k is an integer.

After the exercise, I mentioned that we had previously learnt that when we square root a positive number we get a positive  solution, for example √9 is equal to 3. We have also learnt that when finding the solutions of  x2 = 9 then we have two solutions -3 and 3. I then posed the question: “Is there a number which I can square where I get a negative answer? If you think so, then on your mini whiteboard have an attempt, and if you think it is not possible then write it down your thoughts in your exercise book.”

In my next post, I shall explain how I introduced the idea of imaginary numbers and structured my teaching in order to enable pupils to solve the two equations outlined at the start using the pre-requisite knowledge showed here. There will be a video and some pictures of pupils’ work too.

In Maths there are many generalised procedural calculations which are true for all problem types of a concept. For example, listing a step by step process for pupils to follow which exists for all problem types regardless as to whether the problems include integers, decimals, percentages, numbers in index notation and square roots etc. in the problem type. We can try to create all the possible visual forms of a problem type, where generalising a procedure is a great teaching technique because it allows pupils to demonstrate efficiently their understanding by outlining the algorithm between the problem and the solution – step by step.

Here is an example of generalising the step by step method in order to add fractions with unlike denominators:

This generalised algorithm is also applicable in instances of adding or subtracting like fractions; but pupils already have the lowest common denominator, and the fractions being added or subtracted are in their equivalent form, and so only step 3 is applicable. However, adding like and unlike fractions are seen as two distinct procedures, when a question with like fractions is a similar problem type to where step 1 and 2 are already completed.

A generalised procedure to adding and subtracting fractions is applicable for the following problem types where we have improper fractions, mixed numbers and a mixture of the two, or with calculations using more than three terms. Even through each example looks visually different, distinct and more or less challenging than the other, the generalised procedure is applicable.

Exploring different problem types leads to a greater development of knowledge and understanding which can be applicable in instances such as the problem types below:

‘B’ builds on the knowledge that the denominators are co-prime and therefore the LCD is a product of all three denominators.

Can the teaching of problem types alongside the generalised procedure be beneficial in the other realms of mathematics such as algebra, geometry or data? Possibly, here is an example of expanding double brackets in a generalised form as well as exploring the different problem types.

The generalised form can be summarised into the following steps:

Furthermore, this generalised form allows even the most visually complex problem types to be solvable for pupils, as per the below:

The generalised procedure is applicable in all four different examples of multiplying two binomials to form a quadratic expression, where the expressions multiplied are in the following forms (a and b represent different values):

Discussions can then take place where pupils can begin spotting patterns, that:

I am still getting my head around it all, but would love to hear people’s thoughts.