Today, I had a random flashback to a formal observation I had at my placement school. I remember having a discussion with the observer, a maths teacher, where we were debating over one particular point. I was teaching my second lesson on simplifying surds: from √a  to the form k√b  where k is an integer. Given that this was the first time my 9X2 set were learning surds, I went for a very explicit selection of worked examples, structuring one type of method to simplify a surd to k√b form. In my lesson I was structuring the teaching as below, where I wanted pupils to identify the highest common square number, which is also a factor of the ‘a’ in surd √a.

In the lesson preceding this lesson, and in the weeks throughout the year, I would have pupils complete a recall activity frequently in which they had to identify the square number of the first 15 integers, and also square root the first 15 square numbers. The point was to ensure that pupils could recall these facts from memory, and develop automaticity in doing so, to the extent that there wasn’t an act of mental processing.

The observer was suggesting that it would have been more beneficial for pupils to not have been taught one technique but to have explored instead a myriad of techniques. However, I think that what he was suggesting is only beneficial after they have first understood how to simplify surds in one accurate and efficient method. His suggested method could potentially cause several misconceptions insofar as you will have 30 pupils listing 6 possible attempts consisting of 12 different factors of 72. The lack of guidance and structure can lead to misinterpretations which leads to misconceptions.

In the early stages of learning such an abstract concept it is best to provide one accurate, structured and efficient worked example for students to replicate with different problems and in order for them to consolidate their understanding of how to simplify surds. This is, effectively, pattern spotting. Only then you can start to explore the different routes to the same solution without risking many misconceptions developing, as opposed to the converse. 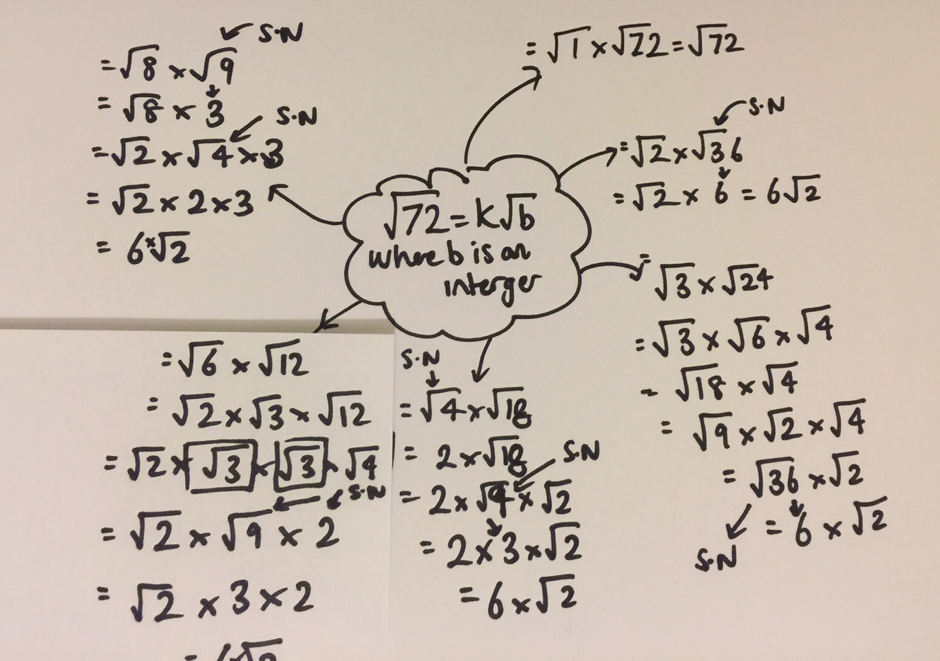 As a maths teacher, and even when I was as pupil myself, I knew the most efficient way to simplify a surd such as √60 was to have a multiplication sum with a factor, which was also the highest square number, because this would result in an integer multiplied by a surd. I knew this because my teacher explicitly told me. Later on we explored different routes to get to the same solution. Since I knew the answer for simplifying  √60 then when I got the same answer through different routes I felt successful and reassured. Why? Simply because I knew one concrete and accurate method to get the simplified solution for the problem. Teaching pupils one accurate method to solve a problem allows pupils to feel successful, and it further empowers them when exploring how to solve the same problem through different routes.

At Michaela, we spend a significant amount of time discussing our worked examples; whether Dani, Bodil or I have made the section of the textbook which is being taught that half-term, we discuss what is the best strategy to solve problems where pupils are adding and subtracting algebraic fractions and where the denominators are integers. What is the best worked example to solve problems where pupils are to substitute a positive integer into an algebraic term or expression? We outline it very clearly in our textbook, and we organise three or more worked examples where we interleave fractions, GEMS, decimals etc., but the cognitive process which pupils go through is similar in all three worked examples. This is because we want pupils to look at a problem and be able to identify each step between the problem and solution. How do we do this? We explicitly state it: step 1, identify the lowest common denominator; step 2, form the equivalent fraction by multiplying the numerators by the common factor; step 3, add the fractions with like denominators etc.

Figure 4 – Example of worked example made by Dani Quinn.

Our pupils are taught explicitly and we demonstrate clearly using our visualisers one concrete, accurate and efficient algorithm for the problem in order to get the solution. The different routes to the same solution of the same problem are explored later on once we know that all kids in the room are proficient at solving a selection of well-sequenced and crafted problem types with the one method we taught them initially. Our pupils are mathematically proficient; they love to learn and they feel this way because they feel successful knowing one accurate method between the problem and solution as to how to add and subtract fractions with integers as the denominator, or variables as the denominator, or expressions as the denominator. They then feel empowered when they can get the same answer through different methods.

And so, I respect that our opinions differed but I am sticking with the way I delivered the initial teaching of simplifying surds. It was the second lesson of this topic and despite not 100% of pupils were getting the right answer on their mini-whiteboards – where they were at the fourth lesson.

Why I believe Mary Bousted’s article’s concluding point is wrong; and, if you think she is right, then it is concerning?

Act the anger, feel the warmth