Right is Right: Why it is very challenging?

After the worked examples were delivered and pupils had completed a selection of questions in the practice set, I posed the question to check if pupils had remembered the fact taught: “Why do 16, 36, 81 and 144 have an odd number of factors?”

Pupils were given 20 seconds thinking time, and I could see hands all going up in anticipation to answer the question. I selected a pupil and this was her response:

I responded “Incorrect,” and all the pupils in the class looked at me stunned, not because I said Incorrect, but because they thought that what *Sally had said was correct. Now, I know what Sally meant but that is not what was said. I then corrected her: “Let’s clarify that when we find the square root of a square number we get one value which is the root number. Therefore, √16 = 4. What *Sally is trying to say is that when you list the factors of a square number, like 16, you get a repeated root because within that list of calculations we have 4 x 4, and because it is repeated we only state one 4 as one factor out of many.”

As written in Doug Lemov’s Teach Like a Champion:

Right is Right starts with a reflection that it’s our job to set a high standard for answers in our classrooms and that we should strive to only call ‘right’ or ‘correct’ that which is really and truly worth those terms.

Many readers may be thinking well actually that is pretty obvious. However, it has its challenges. If I said to Sally “Well, you are nearly there, or halfway” then I would be doing her a disservice. Why? Because what she said was incorrect. It was not mathematically accurate, and I know that if I let that misinterpretation hang around in the air then all pupils in the room will develop a misconception around it. As a teacher, children believe that everything we teach them is correct, and if I allow slightly incorrect answers to seem ok, even though I knew what Sally meant, then my standards of Sally and her peers would not be high enough. As Lemov states in his field notes, “teachers are not neutral observers of our own classrooms,”— it is simply the thought that I know what the pupil means when they say something inaccurately that resonates the most with me.

For example, whilst marking an assessment a pupil wrote the unit for a compound area question in cm2 instead of m2 where metres was the unit used in the question for each length: I marked her answer incorrect. There are many debates on this and I do understand that this is not a calculation error but maybe an error in reading the question, or in stating the correct units, but nonetheless she did not write the correct units for the question. It is not right. By holding pupils to account, you are striving to equate the term ‘right’ with ‘correct’.

As Lemov has stated in his field notes, there are many caveats posed in implementing the strategy of ‘Right is Right’ in the classroom. He mentions the problem of time. That to fix *Sally’s mistake I needed to spend more time than planned in my lesson to correct her, but this is an investment that will be appreciated later on when a question such as this arises in a high stake exam.

Secondly, pupils who are shy or timid may become discouraged in putting their hand ups ever again because they made a mistake. However, I think that comes down to the culture you have in your classroom. Lemov talks about having back pocket phrases for moments like this, and here is the one I use frequently: “Thank you Sally for letting us all learn from your contribution, because of you, you have learnt so much more and so has everybody else.” Then at Michaela, we would give an appreciation with two claps to follow for Sally.

Right is Right is a challenging strategy to implement in the classroom. However, I wholeheartedly believe that it enables pupils to raise the standards of what they can achieve, and, for teachers, it ensures that expectations of what pupils can achieve also remain high.

*The child who I am referring to has been referred to as Sally, and not by her real name.

Assessment: Marking…not of books but of weekly formative quizzes.

I remember marking books; I didn’t find it very useful. However, I found marking exit tickets incredibly informative because I was able to act on the assessment of pupils’ learning the very next day. Compare this to marking books every two weeks on work that I would be giving feedback to pupils who completed this work two weeks ago…and I am giving them feedback too late. Does anybody else see the elephant in the room?

I do think that marking books is a time consuming task which requires a great deal of input from teachers for a nominal amount of benefit for pupils. For this reason, we have a no marking policy at Michaela. What we do is mark our weekly quizzes. For each subject, let’s say pupils are given their maths homework on Friday, they will have a quiz on content that has been taught in the past week, and that has been given as homework on the following Monday. This is a whole school policy. It works in science, as I have observed as a teacher. Similarly, it works with all our other subjects. It is incredibly effective. It gives me an idea of how much pupils have learnt, and how much knowledge they have retained. More importantly, I can act on the feedback within my teaching in a timely fashion, and not two weeks later.

On several occasions, I have been asked how pupils are assessed at Michaela. This post will go into how we assess pupils using low stake weekly quizzes; we then have bi-annual assessments which measure how much pupils have learned and retained over a large period of time.

On Friday, pupils will be given their maths self quizzing homework. Joe Kirby goes into detail here about self quizzing in a previous post of his. Pupils will then have a quiz on Monday testing them on how much of their self-quizzing on maths definitions has been committed to memory, and whether the procedural calculations learned the week prior have been mastered.

Before I go into how the quiz is made it is really important to decide as a faculty what the purpose behind the assessment is. Is there any benefit in the quiz that I have made? What is the intention behind this low stake quiz? Our low-stake quizzes are testing whether pupils have committed the knowledge from their self quizzing to memory, and whether the procedural calculations have been mastered. Knowing such a purpose, this guides the structure and content of the quiz. 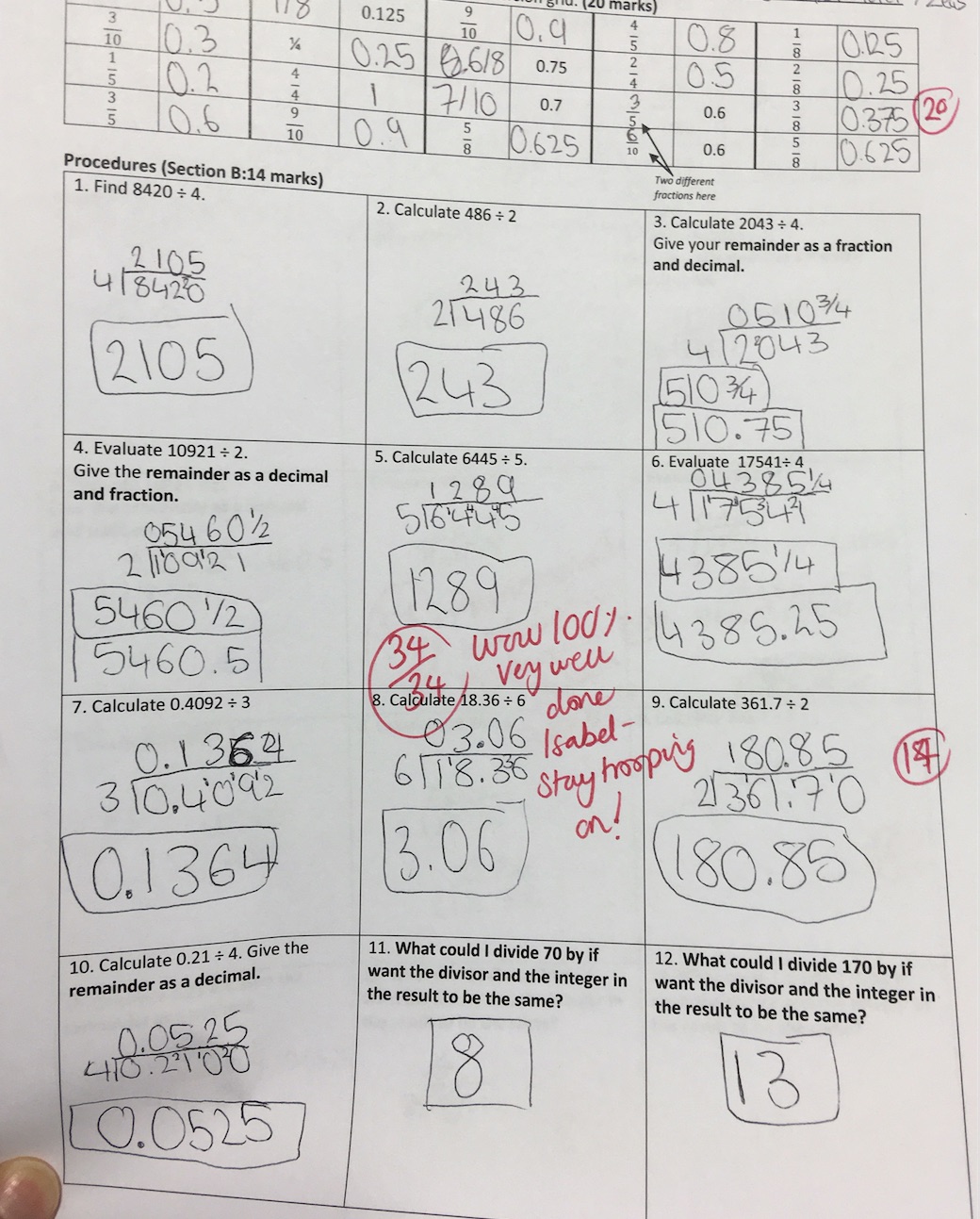 1) Short division where there is no remainder – but with one digit where it is smaller than the divisor. For example, when dividing 8420 by 4, 2 is too small therefore the digit will be 0, and then carry the 2 as the remainder to the next digit to become 20.

2) Short division where there are no remainders, and each digit in the dividend is greater than the divisor.

5) Short division where there are remainders that need to be carried to the next digit. The answer is perfectly divisible by the divisor.

6) Short division where there are remainders that need to be carried to the next digit. The answer has a remainder which needs to be displayed as a fraction as well as a decimal.

9) Short division of a decimal where pupils must write their answer in decimal format. They have to put additional zeros to continue the decimal to allow the remainder to be carried.

10) Short division of a decimal where pupils have to put several zeros to continue the decimal to complete the division.

11) Question where pupils have to identify the closest square number to the dividend and identify that the divisor and the integer as a result will be the same.

Here is a year 7 quiz testing pupils on their week’s worth of teaching on GEMS (Groups, Exponents, Multiplication (and division) and Subtraction (and addition). We teach GEMS as opposed to BIDMAS or BODMAS. Each question selected is testing pupils on a specific skill: 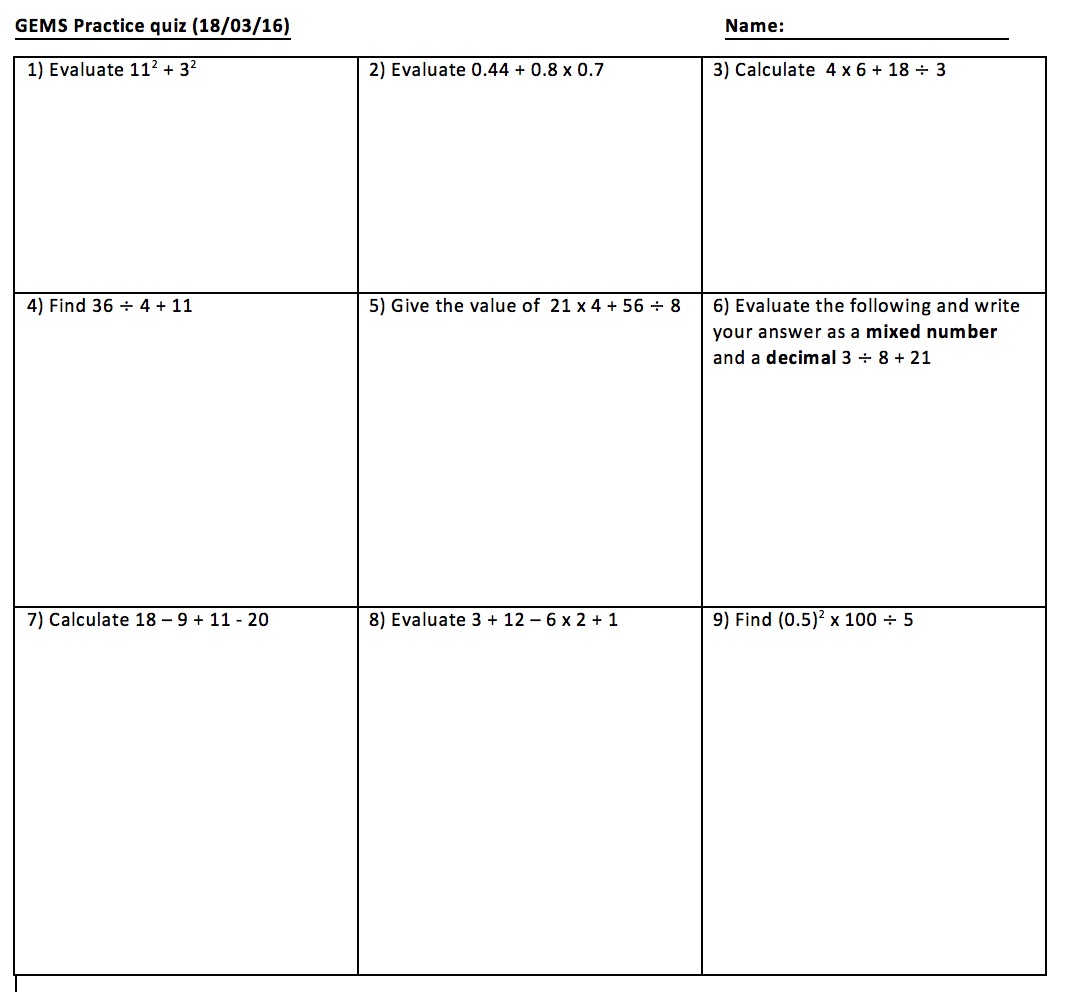 3) two groups of multiplication and division where they come before addition. Must identify both and then add. (GEMS)

5) Another group similar to Q3 – additional but not necessary

6) Multiplication comes before addition but can they identify that the division will result in a fraction which can be added to 21. (GEMS)

7) Practise left to right when we only have addition and subtraction operations because they are equal in GEMS.

9) Can pupils identify whether they can apply GEMS correctly where we have exponents, and then go left to right because of multiplication and division being equal in GEMS.

Here is a year 8 quiz testing pupils on their week’s worth of teaching on the topics: formulae, rearranging equations to change the subject of an equation. 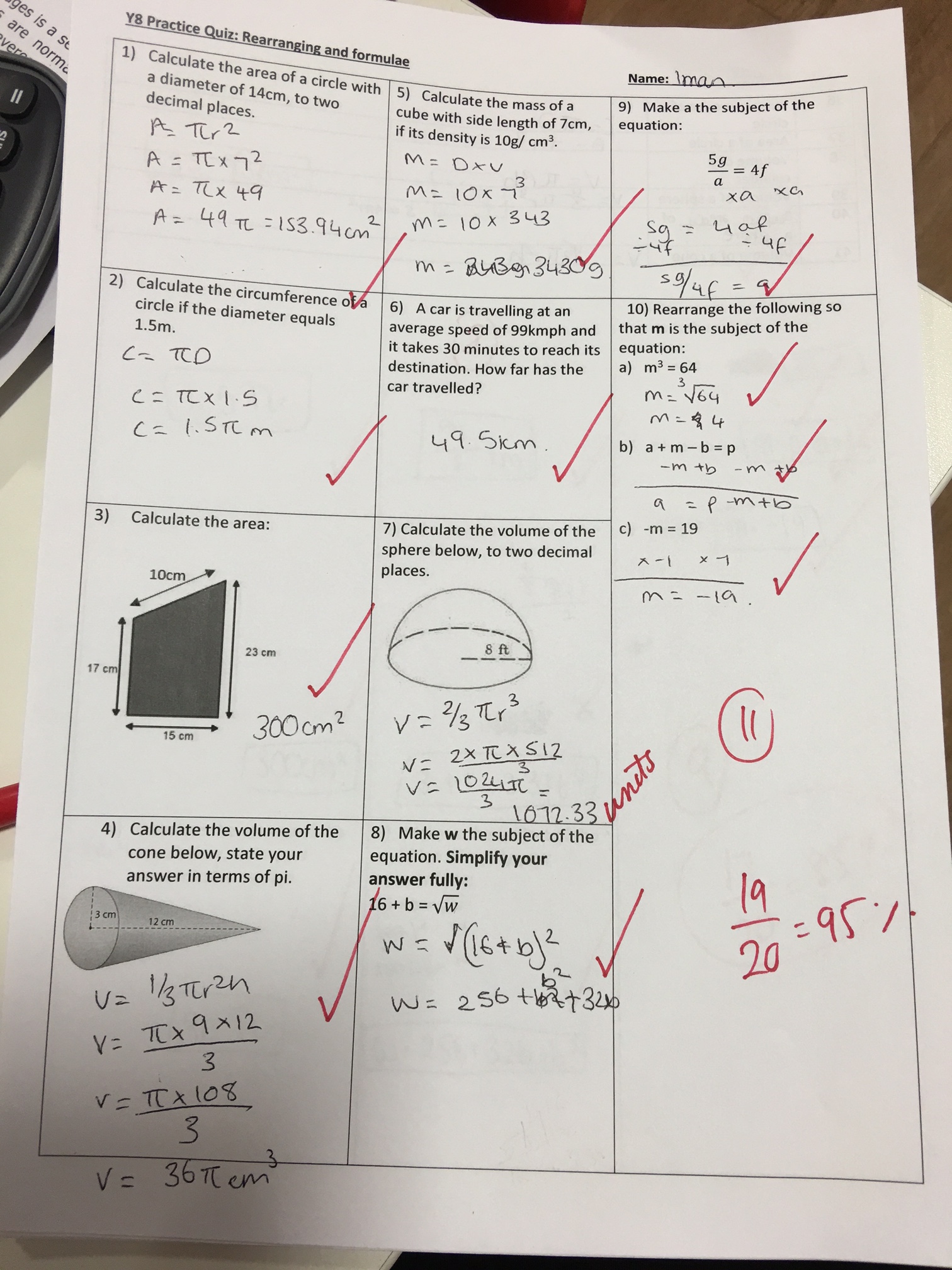 Q1 + 2) Mastery on deciphering whether the length given is the radius/diameter, and identifying whether we must substitute into the formulae for area or circumference, and whether they can recall the correct formulae for either concept.

3) Calculate the area of a trapezium given the slant height and perpendicular height. Shape is also orientated. Can they distinguish which is which, and which length must be substituted into the formulae? Furthermore, can they recall the formulae memorised?

5) Substituting into the equation M = DxV but must identify that the volume is not given. Can they calculate the volume of a cube first, and then find the mass?

6) Substituting into the equation D = SxT but must identify that time is given in minutes and must be converted into hours. Also, that the speed is given in kilometres instead of miles.

7) Calculate the volume of half a sphere given the radius. Can pupils identify that they must half the result after using the formula or use the formula 4/6pi(r) ^3 or 2/3pi(r)3?

8) Rearrange the subject of the equation where we must expand the brackets. Implied in the question by stating “simplify your answer fully” hoping to see the result b2 + 32b + 256.

9) Rearrange the subject where the unknown is the denominator.

10) Rearrange the subject for basic one step rearrangements besides the last one where the unknown is negative. Can pupils spot that the we must multiply or divide both sides by -1 to get m as the subject of the equation.

The quizzes are testing whether pupils have mastered the procedural questions. To make questions challenging we have given the diameter instead of the radius when calculating the area. We have orientated the trapezium, and given both the perpendicular and slant height. We have made it more challenging because we are testing mastery. The rigour in the assessment allows for the rigour in the teaching, and pupils do indeed perform. We spend a significant amount of time at Michaela talking about how the only score to celebrate is 100%. I write postcards for the pupils that get 100% in their quizzes and make a huge deal out of it. Pupils love the feeling of success, and appreciate the admiration from their teachers who recognise the success in scoring 100%.

Low stake quizzes are incredibly powerful because they inform your teaching and planning. If lots of pupils have made a mistake on the same question, this informs me that either they have all missed the point, that I have to reevaluate how I teach the concept in the first place, or both of these points. I hope you find this useful.