Chapter 21, in Engelmann’s Magnus Opus, Theory of Instruction has changed the way I sequence worked examples to communicate a concept. This change took place greatly whilst I was at Michaela Community School when I started experimenting how to teach a UK Maths Challenge After school club. This is written about in more detail, here.

What I noticed, which may sound obvious, is that if you teach using examples which demonstrate the explicit features of a concept first and then progressively make those features implicit then the probability of success for each child in the learning process is greater. Engelmann refers to this as Covertization, “instruction that involves prompt shifts progressively from highly-prompted examples to unprompted examples.”

One example which will be detailed below, would look like this:

Covertization results in examples that communicate a concept, or part of a concept, to be communicated in its most explicit and misconception-proof form.

The best way to appreciate covertization is to look at some examples which aren’t explicit.

Here are examples of fractions:

Here are the following examples that I would use to reiterate the conditions stated above: 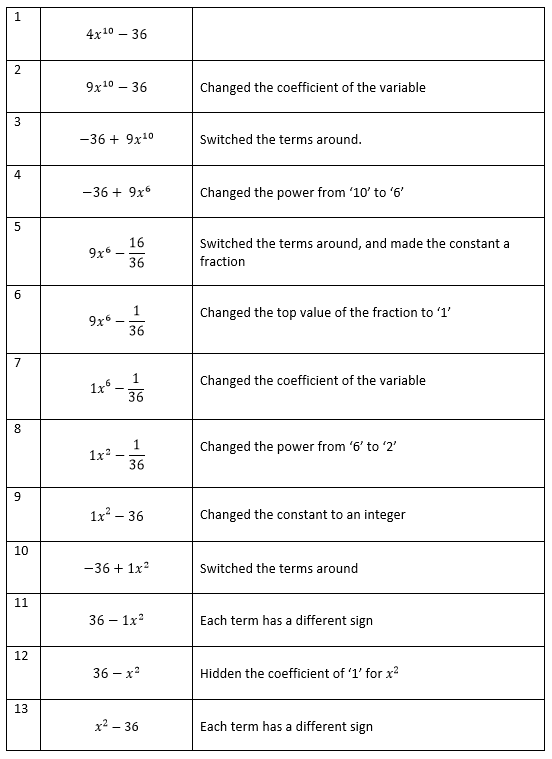 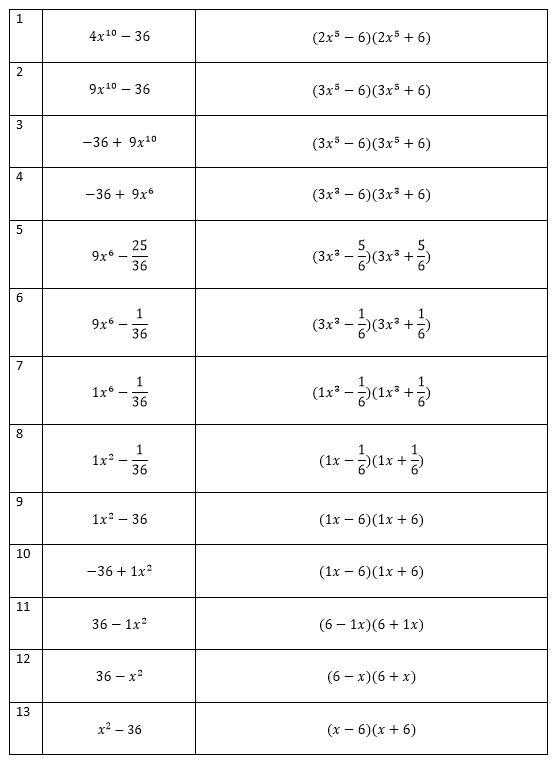 There are other examples that I could include here, however, what I’ve done is limit the examples to only meet the conditions I’ve stated. But look at the complexity of what pupils can identify as an expression known as a difference of two squares by selecting the examples that I have.

More importantly, I’ve started with an example which is explicit with the features that make an expression a difference of two squares. With the initial set of examples, you can see that the coefficient of 1 for isn’t obvious because pupils can’t see it, and ‘1’ as a constant isn’t an obvious example of a square number. Explicit features allow pupils to build a clear and misconception proof understanding of a concept, which is what makes an example powerful.

My final point, we can see that the process of covertization has highly prompted examples allowing pupils to respond successfully to writing the product of two expressions because the coefficients and powers provide them that structure. Starting the other way around with implicit features now looks unstructured and poorly guided for a pupil to know how to rewrite the expression as a product of two expressions.