Atomisation: Breaking down your teaching as you have never seen before…

On Saturday 9th March I delivered a workshop at the La Salle Mathematics Conference in Bristol. This blog post is a summary of some of the points made in the session.

This presentation was on the topic of atomisation. Recently, atomisation has created a lot of conversation on Twitter and at a couple of conferences. What is atomisation and is it the next fad?

It’s not the next fad.

Atomisation is the process of breaking down a topic into its sub-tasks.

Atomisation is a term coined by Bruno Reddy who taught me about it during my second school placement in 2014.

Atomisation is the starting point to every booklet I create in my role as Curriculum Advisor at United Learning. I sit down and list all the sub-tasks that I need to teach that is within the topic. An example of this for Perimeter is available here.

What are the benefits of Atomisation in respect to the big picture?

Atomisation is a process in which teachers can collaboratively identify the specific and detailed knowledge that pupils must know to be academically successful.

Identifying this specific knowledge means that pupils can learn as close to 100% of the domain of knowledge that they need to know. Exam boards and the national curriculum, truthfully, may provide high-level specificity of what needs to be taught, but not the finer details or detailed knowledge that goes into making pupils able to do a task.

For example, pupils are expected to know the following fact below:

And upon reflection, this seems understandable in respect to multiplying fractions, index notation, ratio, proportion etc. but it is not necessarily explicitly stated in exam board specifications or Curricula.

The lack of detailed knowledge outlined by exam boards or textbooks results in teachers reducing the subject content being taught. And the source of information of what needs to be taught from children usually comes from exam tasks, and then the curriculum becomes an endless repetition of exam materials. Similar thoughts have been shared on Daisy Christodoulou’s blog.

Mathematics as a subject is vast. There is so much to teach a child in the space of their academic career. Here is a visual: 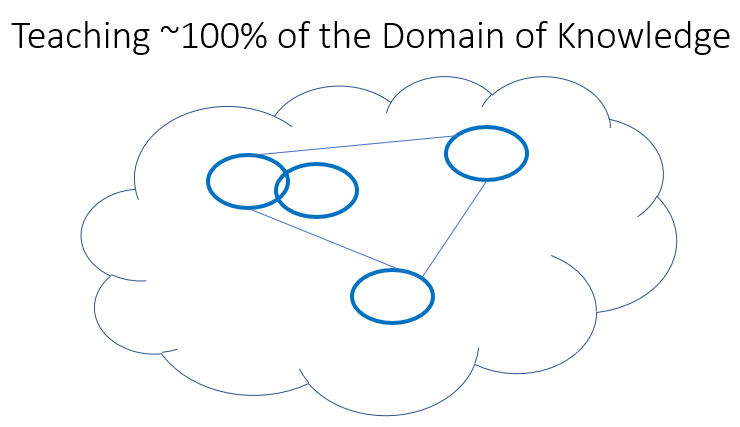 If the bubble represents 100% of the domain of knowledge that needs to be taught. It is the case that we teach small samples of that domain. We teach concepts and how they overlap with other concepts, and we also teach connections between different concepts. However, if we use exam boards and textbooks as our source of information of what needs to be taught in the curriculum, then we inevitably miss out teaching other parts of the domain.

The process of atomisation enables teachers to focus on the concept and identify the finer details that aren’t readily available. Atomisation allows the teacher to teach as close to 100% of the domain of knowledge.

What are the benefits of Atomisation in respect to the teaching process?

Identifying and sequencing all the sub-tasks and specific knowledge that needs to be taught for a concept increases the probability each child will be successful in the learning process.

This means that pupils will be able to appropriately and accurately respond to planned questions, or that they will remember what has been taught at that moment after a long period.

Teaching aspects of a concept that are usually overlooked undermine how successful each pupil will be in respect to their future learning.

For example, not teaching pupils that:

undermines a child’s ability to attempt questions like this:

If pupils get these questions wrong, then the incorrect inference is made. Instead, they must be retaught the topics of ratios from the beginning, but they only need to be taught this fact. And this is a fact has been mentioned several times in the Year 8 Curriculum so far. I’ve resourced a section on problem types like this for the most recent ratio booklet coming out.

Teaching all the sub-tasks of a concept and sequencing it in a logical sequence prevents pupils from being cognitively overloaded because each sub-task taught is being used or covered in future learning. In the teaching process, pupils will have committed prior knowledge in their long term memory so any future learning will occupy space in their limited working memory.

What are the costs of Atomisation?

Atomisation avoids these inadvertent consequences by:

In summary, Atomisation has improved my teaching and as a result my pupils learning more and remembering it a half term later, a year later etc. More importantly, it benefits the children that struggle with learning the most. Atomisation has allowed my weakest pupils learn more in less time, and in my small world, I believe that this is a path that I will continue down when creating resources.