Mixed numbers are introduced as a sum between an integer and a (proper) fraction. 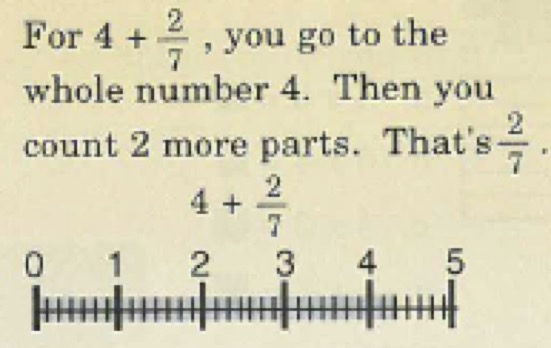 It is visually presented on a number line, you go to the marker for the whole number. Then you count parts for the fraction.

The skill is revisited where pupils write the addition sum between an integer and a fraction as a mixed number, without the number line. Pupils are then asked to do this again with three or four digit numbers.

Pupils also complete exercises where they:

11. Multiplicative relationship between an integer and a fraction’s denominator

Pupils have been taught previously how to list a string of equivalent fractions equal to an integer, listed as skill 8. This was done through the use of their times table facts. Similarly, pupils are now taught how to find the missing numerator of an incomplete fraction equal to an integer.

12. Equivalent fractions from a diagram

Pupils are taught that:

If fractions are equal, pictures of each fraction will have the same shaded area.

If the fractions are not equal, then the pictures do not have the same shaded area. 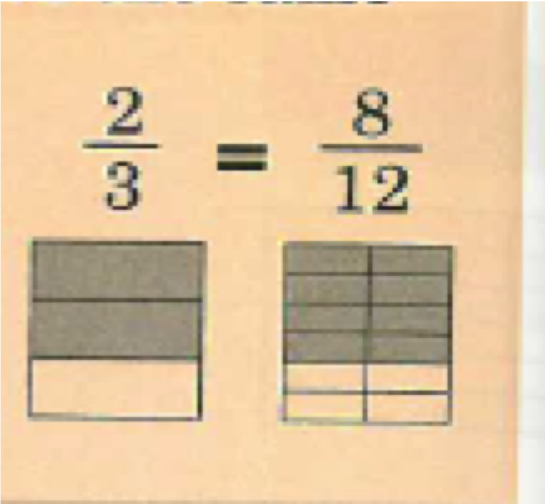 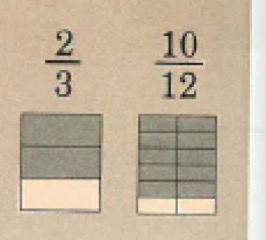 This was also tested using equivalent improper fractions. In the image titled Part 9, I particularly like (c) and (e) because the parts are split horizontally and vertically. Engelmann here has varied the non-relevant aspects of each image: the number of units for each image, the shape being cut horizontally and vertically etc. What matter is the whether the area between each image is the same, if so then those fractions are equivalent. At this stage, pupils are not being asked to demonstrate equivalence using times tables between two fractions.

Pupils are taught that if you multiply an integer by a fraction which is equal to 1, then the result is the integer in the question. Images are provided to show that you are taking two whole units, and splitting the shape into more parts in each unit.

Pupils are also learning to spot visually that when you multiply an integer by a fraction with the same numerator and denominator that it is equivalent to multiplying the integer by one.

14. Placing fractions on a number line  (work on)

This was an exercise that pupils did find difficult. Pupils had to place an improper fraction on the number line. What pupils found the most difficult was picking an integer equivalent fraction which two-fifths came after. For example:

Exercises were included where pupils were asked to also label fractions onto a number line where the integers, or the integers’ equivalent fractions aren’t labelled.

15. Equivalent Fractions – Multiplying a fraction by 1

In this exercises pupils are demonstrating equivalence between two fractions by writing the fraction to multiply the first fraction by to get the second fraction.

Below is an example of an exercise, where pupils are asked to state the fraction for each image, and demonstrate equivalence by multiplying fractions.

A teaching point to mention: I did have to structure the working out for the pupils. I would say: 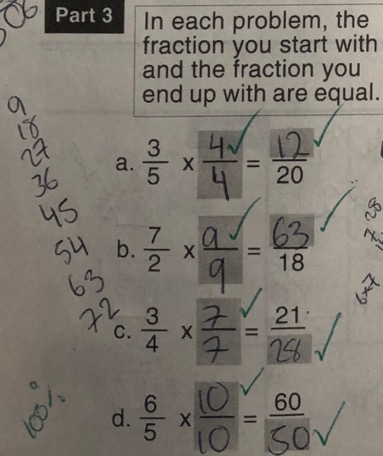 It was important to include this because I wanted pupils to know exactly how to demonstrate their working out. The pupils in this group struggled to structure their understanding on paper in way which made sense to somebody reading their work. By sticking to the following, essentially sticking to a ‘script’ then pupils were able to demonstrate equivalence consistently in this type of exercise throughout the book.

Pupils were then given exercises where one fraction was equal to an incomplete fraction where they filled in the blank and the fraction that they were multiplying by. Here is an example of a pupil’s work.

In my next blog post, I will  outline the remaining fraction skills that are taught in Engelmann’s sequence of lessons.